ASSESSING the RISK involved with a hazard is to consider the LIKELIHOOD of the hazard becoming uncontrolled, and the OUTCOME - the injury or damage likely to be inflicted.

EG Even as we read this - provided we are indoors! - there is the potential hazard of the ceiling falling on us. The outcome from this would be very serious. However, the likelihood of this happening is remote (unless we're in a building being demolished, etc.) so the risk would be assessed as minimal, and no control needed. (Were this to be a building under demolition, however, we would assess the risk as high, and immediately leave the building, or install scaffolding, etc.) The assessment is further refined by considering how many people are likely to be affected by the uncontrolled hazard - the FREQUENCY.

ASSESS: once the HAZARD is identified, the risk associated with it is analysed and compared.

LIKELIHOOD: How likely is the hazard to become a problem? Is it possible for it to become uncontrolled? When? How? A scale may range between "Highly Likely" to "Most Unlikely".

OUTCOME: If our hazard does become uncontrolled, what is the consequence? What will the damage/injury/illness be? A scale here may range between "Catastrophic" to "Insignificant".

FREQUENCY: What is the exposure to the hazard? How often are personnel likely to frequent the area? How many personnel are likely to be exposed? Our scale here may range from "Continuous Exposure" to "Near Impossible".

Note there are various graphical devices called "Risk Matrices" which provide quick indicators for grading hazards in a workplace. Below is an example of a matrix produced by one authority. Obviously, the lower the number, the higher the priority of controlling the risk associated with the hazard will be. 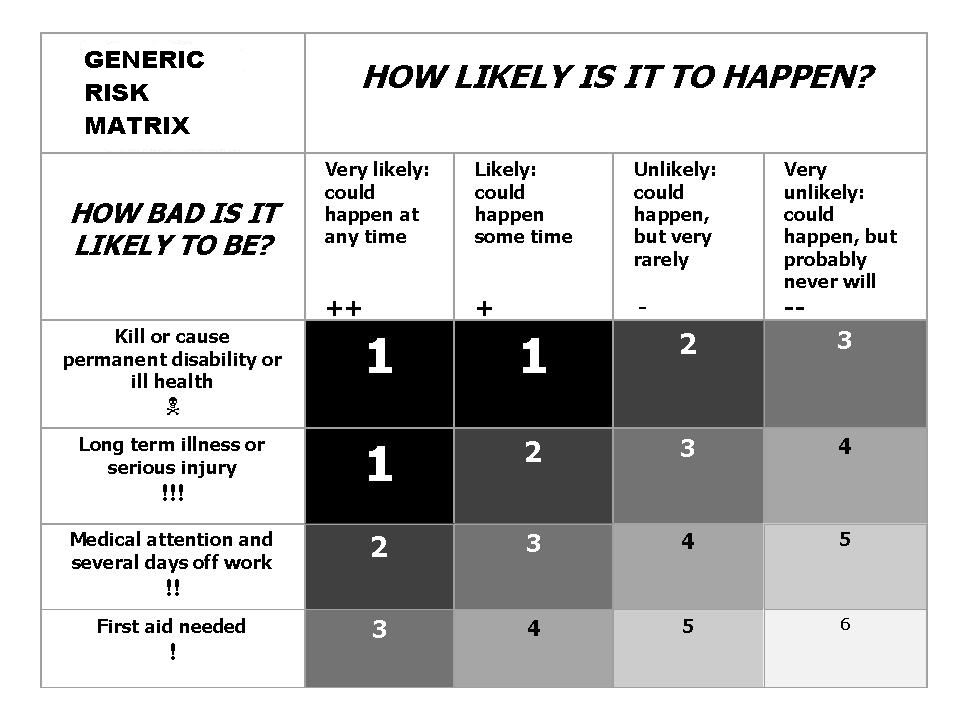 < Back to Triangles index